21 is the Legal Drinking Age

Despite these improvements, too many teens still drink. 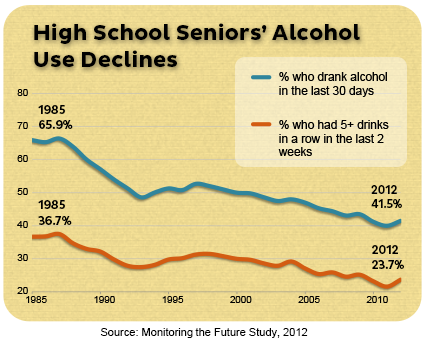 Why did Congress pass the national drinking age act?

After Prohibition, nearly all states adopted a minimum legal drinking age (MLDA) of 21. Between 1970 and 1975, however, 29 states lowered the MLDA to 18, 19, or 20, largely in response to the change in the voting age. Studies conducted at the time showed that youth traffic crashes increased as states lowered their MLDA. In addition, the "blood borders" between states with different MLDAs caught public attention after highly-publicized crashes in which youth below the legal drinking age would drive to an adjoining state with a lower MLDA, drink legally, and crash on their way home.

Advocacy groups urged states to raise their MLDA to 21. Several did so in the late 1970s and early 1980s, but others did not. To encourage a national drinking age, Congress enacted the national MLDA. A review by the U.S. General Accounting Office, conducted in 1988, found that raising the drinking age reduced youth drinking, youth driving after drinking, and alcohol-related traffic accidents among youth.

Yes. Injuries from teen drinking are not inevitable, and reducing teen access to alcohol is a national priority.

Search Terms
Alcohol
September 2013
This article is part of a series: We Don't Serve Teens
Return to top