National Consumer Protection Week is a time to shed light on how scammers will try to rip off anyone, including the military. The FTC’s military dashboard compiles five years’ worth of reports from servicemembers, veterans, and military families. From January 2017 through September 2021, military consumers told the FTC about more than 961,000 reports related to fraud, identity theft, or other consumer issues.

Why target the military? Scammers follow the money — and as a servicemember, you get a steady paycheck from Uncle Sam. After you leave the service, scammers try to trick you out of hard-earned benefits. Some scammers even try to gain your trust and get your guard down by claiming a military affiliation.

For both servicemembers and veterans, the top two categories of fraud reported in the past five years involved imposter scams. While all kinds of impersonators might target the armed forces, recent reports show that impersonators pretended to be from a government agency or a legitimate business.

But no matter what the story is, if someone contacts you out of the blue, remember:

Scammers are always changing their tactics, so it’s important to hear from you. What are you seeing? Tell the FTC your story at ReportFraud.ftc.gov, or in Spanish at ReporteFraude.ftc.gov.

And come see what’s going on during #NCPW2022 at ftc.gov/ncpw. Please join us and spread the word through your community. 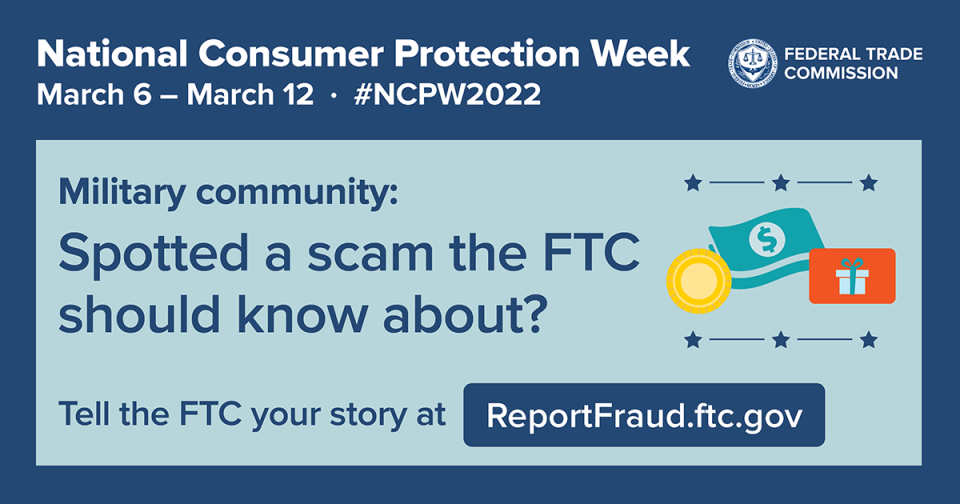