How To Block Unwanted Calls

Scammers can use the internet to make calls from all over the world. They don’t care if you’re on the National Do Not Call Registry. That’s why your best defense against unwanted calls is call blocking and call labeling. Which type of call-blocking or call-labeling technology you use will depend on the phone — whether it’s a cell phone, a home phone that makes calls over the internet (VoIP), or a traditional landline.

Consumer Alert: Mobile carriers are shutting down their 3G networks. If you have an older cell phone, you may not be able to call or text. The FCC has advice about what to do.

What Are Call Blocking and Call Labeling?

When we talk about call blocking, it means technologies or devices that can stop a lot of the unwanted calls you get — like scam calls and illegal robocalls — before they reach you. Cell phones, home phones that make calls over the internet (VoIP), and landlines each have their own call-blocking options. Just know that call-blocking services could block some legitimate calls.

Some companies also offer call labeling. Call-labeling services show categories like “spam” or “scam likely” on your phone’s screen for incoming calls. Then you can decide whether to answer the call.

Block Calls on a Cell Phone

One of the best ways to block unwanted calls on a cell phone is to download a call-blocking app. A call-blocking app acts like a filter. The company behind the app uses call data or reports from users, the FTC, and other sources to predict which calls are illegal or likely scams. The app then intercepts those calls before they reach you. Some apps are free, but others you have to pay for.

To get a call-blocking app

Apps typically let you choose how to respond to calls flagged as scams. Calls might

Check the built-in features of your phone

Many cell phones come with settings that let you block calls from specific numbers, though there might be a limit to how many numbers you can block. Cell phones also typically have features like Do Not Disturb, where you can set hours during which calls will go straight to voicemail.

Check your phone provider’s website or call customer service to find out what call-blocking or call-labeling services it offers or recommends. Some services are free, but others might charge you a fee.

Block Calls on a Home Phone That Uses the Internet (VoIP)

First find out if your phone uses the internet (VoIP)

It’s possible you have VoIP service on your home phone and don’t know it. VoIP stands for Voice over Internet Protocol, and it simply means that your phone makes calls over the internet, not over phone lines. If you’re not sure what you have, check with your phone provider. But if you get your phone service through a cable company, or use a phone/internet/cable bundle, you probably have VoIP service. If you find out you don’t have internet-based phone service, skip down to the advice on blocking calls on a traditional landline.

Internet-based call-blocking services can block unwanted calls on phones that use the internet. Your phone provider might be able to recommend a specific service. But you also can search online for expert reviews. Some services are free and some charge you each month.

Some internet-based services and phone apps require all calls to be routed through their service, where they are instantly analyzed. You may have choices about how unwanted calls are handled. For example, unwanted calls might

See what your phone provider offers

Check your phone provider’s website or call customer service to find out what your options are or if there’s a service it recommends. Some phone providers offer these services for free, but some charge a fee.

Block Calls on a Traditional Landline

Some devices use databases of known scam numbers but let you add numbers you want blocked. Other devices rely on you to create and update your own list of numbers to block.

Some use lists to

Some devices also use lists of approved numbers. That helps you limit which calls get through, or lets you set up “do not disturb” hours during which calls go straight to voicemail. Other devices try to weed out robocalls by playing a prerecorded message prompting callers to press a number to continue the call.

Some services are free, but some charge a fee. 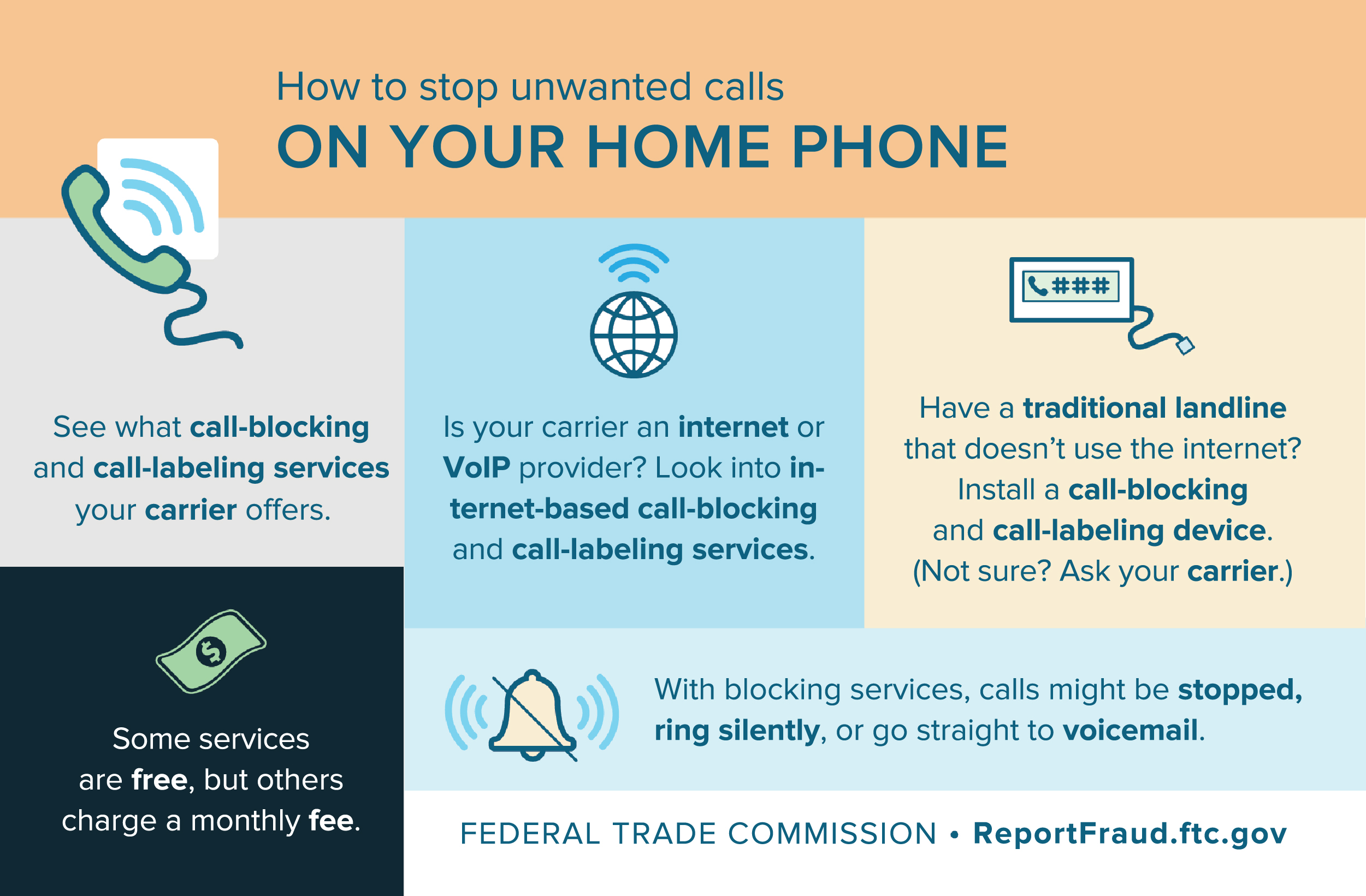 What About the National Do Not Call Registry?

The National Do Not Call Registry is designed to stop sales calls from real companies that follow the law. The Registry is a list that tells telemarketers what numbers not to call. The FTC does not and cannot block calls. Scammers don’t care if you’re on the Registry.

Even though the Registry can’t stop all of the unwanted calls you’re getting, being on the Registry could reduce the number of calls you get and make it easier for you to spot illegal calls. If a caller is ignoring the Registry, there’s a good chance it’s a scam. Even if it’s not a scam, you don’t want to do business with or give your information to someone calling you illegally.

If you answer the phone and hear a recorded message instead of a live person, it's a robocall. Robocalls trying to sell you something are illegal unless the company trying to sell you something got your written permission, directly from you, to call you that way. If someone is already breaking the law by robocalling you without permission, there’s a good chance it’s a scam. At the very least, it’s a company you don’t want to do business with.

Call blocking can help stop robocalls from scammers. But some robocalls might still get through. If you get an illegal robocall, hang up. Don’t press a number, which could lead to more robocalls. Then report it to the FTC. Some robocalls are legal and don’t require your permission, like purely informational messages, political calls, or calls from charities. But if they try to also sell you something on the call, it becomes an illegal robocall.

Calls From Fake Numbers — or “Spoofing”

Call blocking technology can sometimes stop calls from scammers who can make fake names or numbers show up on your caller ID. Scammers often use these “spoofed” names and numbers in government impersonator scams to make you think it’s the IRS or law enforcement calling. Then they try to convince you to wire money or pay them with gift cards. Learn more about common phone scams.

In something known as neighbor spoofing, scammers display a number with your area code. They often match the first six digits of your phone number, thinking that you’ll be more likely to answer the call. Often the faked name and number belong to a real person who has no idea their information is being misused.

If you didn’t lose money and just want to report a call, you can use the streamlined reporting form at DoNotCall.gov.

If you’ve lost money to a phone scam or have information about the company or scammer who called you, report it at ReportFraud.ftc.gov.

Report the number that received the call, the number that appears on your caller ID — even if you think it might be fake — and any number you’re told to call back. Also report the exact date and time of the call, if you’re able to. The FTC analyzes complaint data and trends to identify illegal callers based on calling patterns. We also use additional information you report, like any names or numbers you’re told to call back, to track down scammers.

We take the illegal callers’ phone numbers you report and release them to the public each business day. This helps phone companies and other partners that are working on call-blocking and call-labeling solutions. Your reports also help law enforcement identify the people behind illegal calls.