If you answer the phone and hear a recorded message instead of a live person, it's a robocall. If you’re getting a lot of robocalls trying to sell you something, odds are the calls are illegal. Many are also probably scams. Here’s what you need to know about robocalls and what you can do about them.

If you answer the phone and hear a recorded message instead of a live person, it's a robocall. A robocall trying to sell you somethingis illegal unless the company trying to sell you something got written permission, directly from you, to call you that way. To get your permission, the company has to be clear it’s asking to call you with robocalls, and it can’t make you agree to the calls to get a product or service. If you give permission, you have the right to change your mind later.

A few types of robocalls are allowed under FTC rules without your permission, like political calls about candidates running for office or charities asking for donations. Keep reading for more examples.

If you’re getting a lot of robocalls trying to sell you something, odds are the calls are illegal. Many are also probably scams.

Why do I get so many robocalls?

It’s cheap and easy for scammers and telemarketers to make robocalls over the internet from anywhere in the world.

How can I know if a robocall is a scam?

If someone is already breaking the law by robocalling you without permission, there’s a good chance it’s a scam. At the very least, it’s a company you don’t want to do business with. Don’t rely on your caller ID. Scammers can fake the name and number that shows up, making it look like a call is from a government agency like the IRS or a local number. That’s called spoofing. 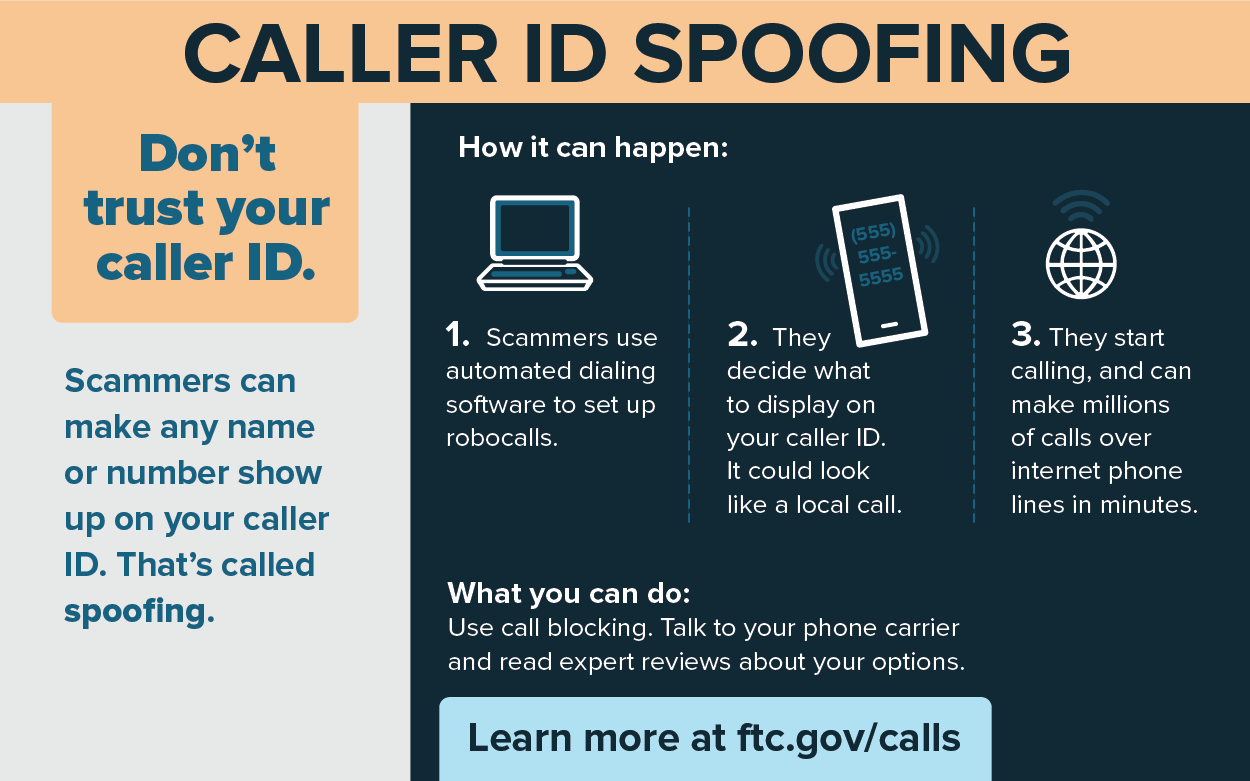 You can watch out for common phone scams like government impersonator scams. If someone calls you out of the blue and asks you to hand over personal information or wire money or pay with a gift card, it’s a scam.

What kinds of robocalls are allowed without my permission?

Under FTC rules, some robocalls don’t require your permission:

How can I get fewer robocalls?

Call-blocking and call-labeling solutions can help you get fewer illegal robocalls The call-blocking or call-labeling option you choose will depend on whether you’re getting calls on a cell phone, traditional landline, or home phone that makes calls over the internet (VoIP).

What should I do if I get an illegal robocall?

Hang up. Don't press any numbers. The recording might say that pressing a number will let you speak to a live operator or remove you from their call list, but it might lead to more robocalls instead.

Report the call to the FTC at DoNotCall.gov. Report the number that received the call, the number on your caller ID, and any number you’re told to call back. Also report the exact date and time of the call, if you know it. Knowing all of this information helps the FTC track down the scammers behind the call. Even if you think the number on your caller ID is fake, report it. The FTC analyzes report data and trends to identify illegal callers based on calling patterns.

The FTC takes the illegal callers’ phone numbers you report and releases them to the public each business day. This helps phone companies and other partners that are working on call-blocking and call-labeling solutions. Your reports also help law enforcement identify the people behind illegal calls.

What else is the FTC doing about robocalls?

The FTC continues to bring enforcement actions against robocallers and has already stopped people responsible for billions of robocalls. You can read about recent FTC cases and other robocall-related actions in the FTC’s press releases.

The FTC also works with other law enforcement agencies and encourages industry efforts to combat robocalls and caller ID spoofing. The FTC has led initiatives to develop technology-based solutions, including a series of robocall contests that challenged tech experts to design tools that block robocalls and help investigators track down and stop robocallers.

Why doesn’t the Do Not Call Registry stop robocalls?

The National Do Not Call Registry is designed to stop sales calls from real companies that follow the law. The Registry is a list that tells telemarketers what numbers not to call. The FTC does not and cannot block calls. Scammers don’t care if you’re on the Registry.

Even though the Registry can’t stop all of the unwanted calls you’re getting, being on the Registry could reduce the number of calls you get and make it easier for you to spot scam calls. If a caller is ignoring the Registry or making an illegal robocall, hang up. There’s a good chance it’s a scam.

Learn more about the Telemarketing Sales Rule that governs robocalls on the FTC’s Business Center.