an effort to fight income scams and help people recognize and avoid them. With record unemployment and the ongoing financial impact of the pandemic, many people are looking to make ends meet — and scammers are pitching income scams with false promises of success and financial security.

In a typical pitch, scammers will say that you can make a lot of money, for example, working from home with little time and effort, or starting your own online business. But those promises of big money are all an income illusion. In fact, in the first nine months of 2020 alone, people reported to the FTC that they lost at least $150 million. The total amount of alleged injury for the FTC cases announced today is over $1 billion. Income scams hit people hard.

Sometimes these scammers focus their pitches on particular communities. The cases announced today by the FTC and its law enforcement partners show that people in every community need to be on the alert for income scams. In one case, a work-from-home scam targeted Latinas through Spanish language TV ads. In another case, an alleged investment scam affected older adults, retirees, and immigrants. And in yet another case, we saw servicemembers, veterans, students, and college-age adults targeted with a business coaching scam.

When the FTC analyzed customer data from some of our cases, we found that in income scams where the average loss was less than $500, people who lost money were 44% more likely to live in majority Black communities. You can spot income scams  if you know the scammers’ tactics. 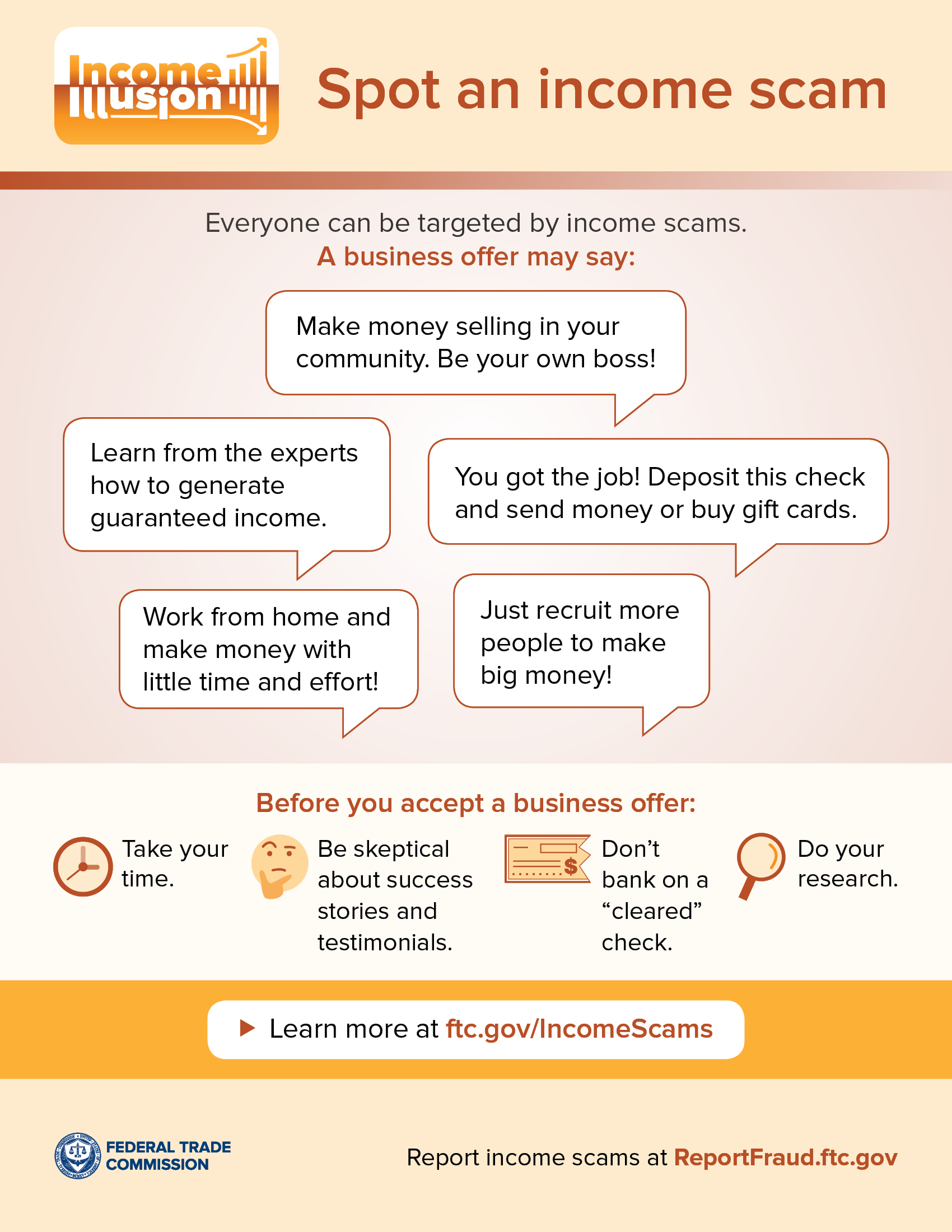 And if you know the signs of an income scam  you can avoid it and help others avoid it, too. If you spot an income scam, report it at ReportFraud.ftc.gov. 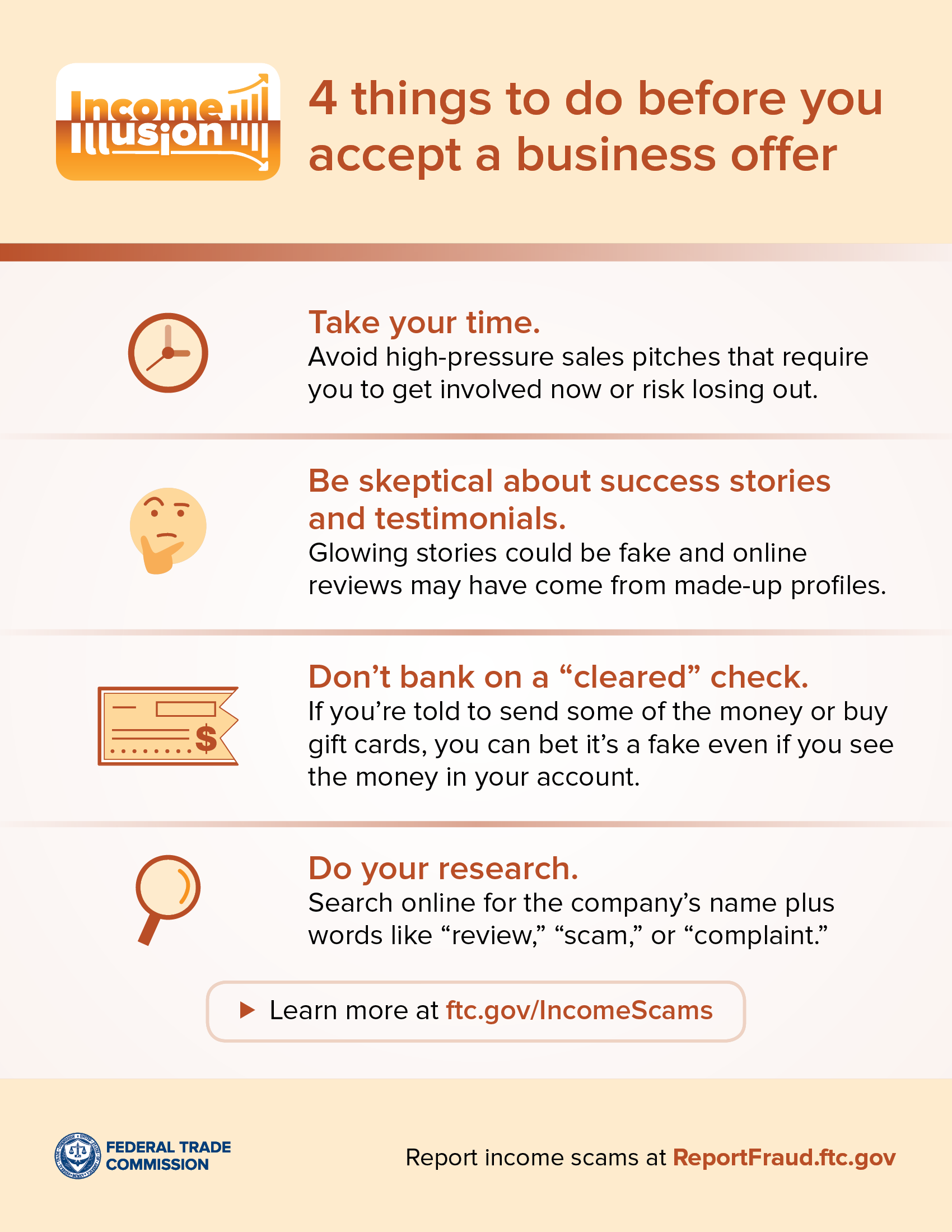 Watch this video to learn more: 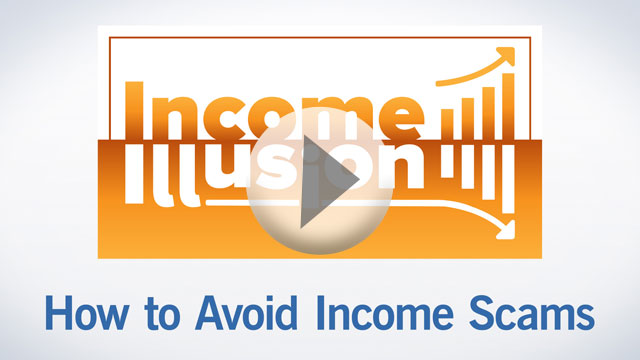 Curious George
So far I've seen right through them. I've laughed and hung up, I've put the phone down and let them give their entire sales pitch, then hung up. The best though is that my phone number is not published, if I haven't given it to you, it can't be gotten. They call, they go into their sales or scare speech and after a few minutes I simply ask them for my name, *silence*, I hang up. It can be fun, but usually I either don't answer or hang up immediately.
jericamsjerica
Thank you for posting and sharing your support for individual resilience. This message helps shape the dialogue around basic financial literacy questions.
Arsea - TN
Years ago I fell for an online real estate scam to the tune of $10,000. Emotions got the best of me. Please remember the old adage "If it sounds to good to be true"
clmn4751
Check with your State Attorney General or the State Attorney General in the state the services are coming from.
Ravi56
Thanks for your help and support and I pray to God to keep you always in high esteem.
TerryMC
Thanks to the FTC for the work they do. I have become better informed from their articles.
burnard
I offen repost the FTC blog subjects on Facebook. There are many who have not idea what the FTC is about. p,s. - The Income-Illusions banner is well designed. : ]
Depressed
I am a 66 year old widow and I just got scammed for $2500.00. They took all my money promised me I won a truck and money. Then I got scammed again thinking I would get more money. One said he was Mark Zuckerberg saying I won Facebook lottery. One said Micheal Rob said if I send cards I would get 7500.00. They took my whole check. I have 11 grandchildren that I can not buy them anything for Christmas. It also took all my food money. Now I am broke. I did not know about people being scammers. It is sad no one can stop them. I feel so stupid now that I have lost it all. Please don’t listen to anyone saying they are from FEMA or you have won a truck and some money. These scammers need to be caught.
rmendez

You can report this to the FTC at RepotFraud.ftc.gov. Your report helps law enforcement stop these scams. Please report it.